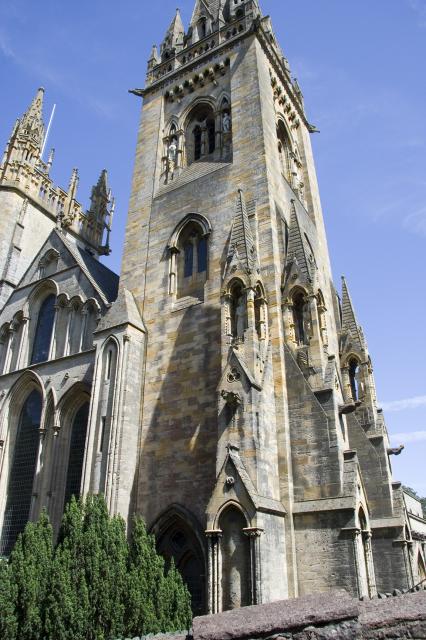 The church was founded in 1107, and a series of building programmes were undertaken in the twelfth, thirteenth and fourteenth centuries. The northwest tower was built by 1500. The site is pre-Norman, and Llandaff Cathedral is dedicated to St Peter and St Paul, but also the Welsh saints Dyfrig, Teilo and Euddogwy. The church was partially ruined for nearly two centuries after the Reformation, and before the nineteenth-century restoration work, a classical building by John Wood was placed on the site, although it was left unfinished in 1752.

The nineteenth-century restoration was undertaken initially by T.H. Wyatt, and then by Prichard and Seddon, the latter drawing on his connections in London artistic circles to bring the talents of D.G. Rossetti, William Morris and their circle to furnish the church in the 1860s. Llandaff Cathedral suffered war damage in 1941, and rebuilding was undertaken by the architect George Pace, who also oversaw the many new fittings and the introduction of Jacob Epstein's Majestas figure in the nave in 1957.